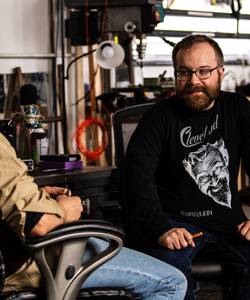 Michael is a director, producer, and location scout/manager. He attended the University of Akron (BA, Media Production 2006) and had an internship at the Tribeca Film Center in New York City. His first feature documentary entitled "The End Of The World As We Knew It" was a selection of the 33rd Cleveland International Film Festival. As a freelance filmmaker he has worked primarily in the locations department on films such as "Captain America: The Winter Soldier", "Fast and The Furious 8", "My Blind Brother", and "My Friend Dahmer" among others. He currently works as the Production Coordinator for the Greater Cleveland Film Commission, where his main goal is to work with filmmakers to attract them to film in Northeast Ohio.

Mike’s Satellite Fund 2019 film is called “Robert Banks: I'll Tell You About That Later”, a portrait style documentary about Cleveland based filmmaker, photographer, and educator Robert Banks. As a young child Robert loved exhibiting films to his neighbors on an 8mm projector, and eventually had an 8mm camera and experimented often. That grew into a lifelong passion for filmmaking. He made several short films that gained him world-wide acclaim but has never made a feature film until now. Paper Shadows, is an experimental black and white film shot almost exclusively on 35mm film and using mostly a crew of students from New Bridge Academy. “Robert Banks: I'll Tell You About That Later” will take a look at Robert as he finishes this film in time for a screening at the Cleveland Cinematheque.