FROM INSIDE: You Opened That Can...

Bridget Moser gives some insight into her shot-by-shot remake from Sopranos as part of SPACES residency:

In the second episode of the sixth season of The Sopranos, Tony Soprano exists in a secondary reality in which he is a precision optics salesman on a business trip in Costa Mesa, California. He is continually distracted by a flashing beacon of light on the horizon a great distance from his hotel room. Images of a nearby raging wildfire play out on the TV in the hotel bar.

He has mistakenly taken the wallet and briefcase of another person—Kevin Finnerty—to whom he bears a striking resemblance. In a discussion with a group of fellow business travelers, alluding to his possible midlife crisis, he asks, "I mean, who am I? Where am I going?" On TV, a commercial asks, "Are sin, disease and death real?"

Later, two Buddhist monks mistake Tony for Kevin Finnerty and confront him about the horrible winter they've endured thanks to his faulty heating system. They get into a physical altercation after Tony denies his mistaken identity. The next morning, having discovered that the hotel elevator is out of service, he slips and falls down the stairs and later receives an unfortunate diagnosis from a doctor unrelated to his injuries.

He returns to his hotel room and begins to make a phone call, but hangs up the receiver instead. Outside the beacon of light flashes. He sits quietly at the end of his hotel room bed.
Under a clip of the final scene of this episode uploaded to YouTube by a fan, user Bobby commented: "Something about this scene. Makes me feel life. A certain realization!"

When my partner Paul and I were spending the day shooting the videos included in this project at SPACES, I thought we would probably finish by midnight. It was 3:00 AM when we got to "shot-for-shot remake of Sopranos" in my shot list, which actually required ten separate setups and shots. At that point I thought maybe it was just a stupid idea after all. Thankfully Paul is a more pragmatic person than I am and said we should do it. 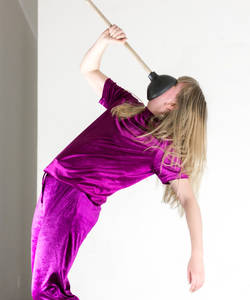 Bridget Moser (b. 07/19/86) is a performance and video artist whose work combines prop comedy, experimental theatre, performance art, absurd monologue, existential anxiety and intuitive dance. She has presented work in venues across Canada, including the Art Gallery of Ontario, Mercer Union, the Art Museum at the University of Toronto,... go to artist page