IN RESPONSE: Please Don't Let it Be Too Close & Apologize To America 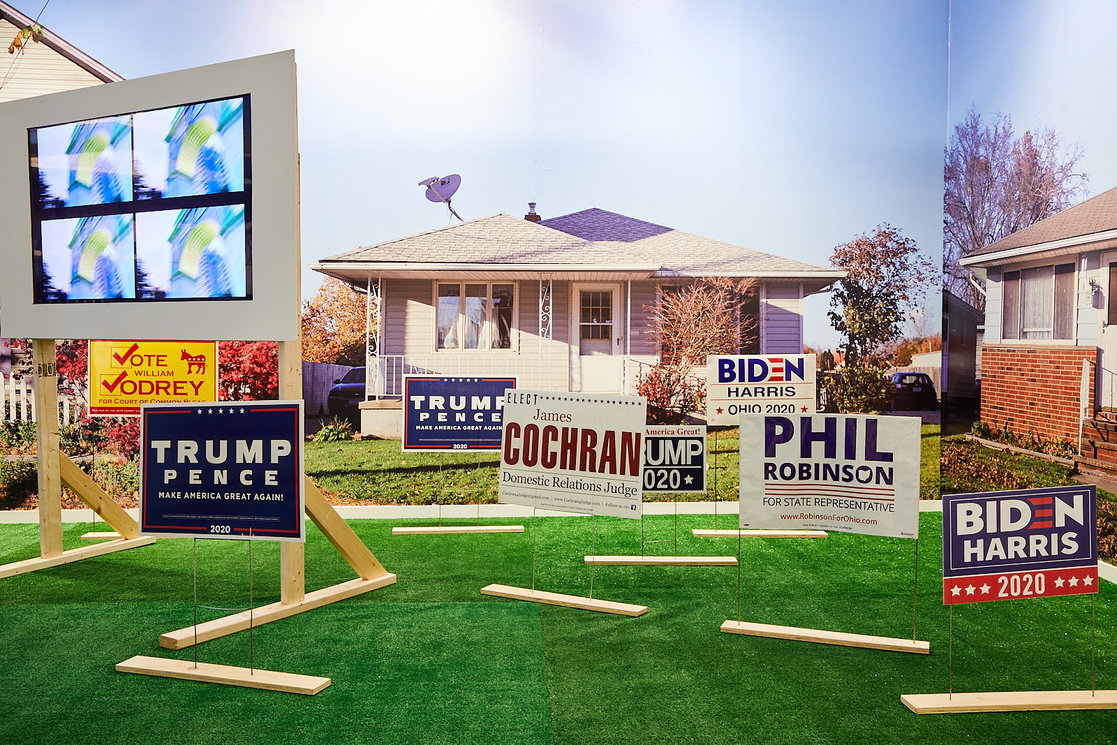 Alicia Grullón, though based in NYC, has managed to capture the "get off my lawn" hostility of Cleveland’s neighborhoods during the 2020 elections. I hadn't been in an art gallery in more than a year since the COVID-19 crisis hit the world. It was a delightful experience to visit SPACES; I explored the space by myself; quiet and intimate. For a second, the gallery felt big and empty but I was quickly drawn to the familiar landscapes of the neighborhoods that I drive by daily featured on the walls of the exhibit. The feeling of emptiness disappeared completely when I sat down to watch Alicia Grullón's PLEASE DON'T LET IT BE TOO CLOSE, a video collage that blends video montages, performance, interviews, and so much more.

The impeccable cleanliness of the gallery and the reality that Covid exposure has limited how people consume art made it even more impactful. There I was sitting with Alicia Grullón on the screen, as she retold the experiences of many dealing with COVID-19, politicians, and white supremacy. Alicia Grullón documented perfectly what it is like to be on the desperate side of the battle. This kind of passionate documentation is what we need, so in decades to come history cannot be corrupted (though I’ll bet you some will try).

Alicia Grullón took me for a ride with monologues about day to day pandemic living, filled with stress, uncertainty, and frustration. Students asking why, in the middle of a pandemic, there is a presidential debate broadcast at their school. An elderly couple wondering how they can keep going when their resources are near to none. Essential workers dealing with anti-maskers and the vicious shenanigans they pull--remember last year when those on the frontline were applauded as heroes?

The pandemic, politicians, and white supremacists are the daunting and destructive forces decimating American BIPOC communities. The mega-rich (you know which ones) are happily devouring the struggling working class, while politicians have their parades and publicity stunts for sympathy. While the ruling class seems to operate in an alternative reality, the social-economic gap is expanding at alarming rates. Ordinary people's lives are in danger from nearly every angle.

Jehan Robertson, an interviewee on Alicia Grullón film, beautifully explains that Trump is the ideal image for the white man's masculinity nostalgia; many strived for years to achieve Trump’s status but of course (spoiler alert!) not all can be rich and famous. A passing glance at Trump's media representation from before his presidency will tell you he was a desirable figure for many: white, wealthy, Wall Street, opulent, stubborn, loud. Even if much of what this image said about him is a lie, it still permeated our cultural ideals. Later in the film another brilliant interviewee, Lara Raicovich, mentioned that Bush and Cheney deconstructed the reality of many people in the United States to their advantage, selling them an unattainable vision of the American Dream. Combine this with Trumpism and today's social media era where truth and facts are moldable and you have a recipe for potentially violent fantasy and nostalgia.

Alicia Grullón took me on the impactful journey that was 2020, with montages of families in the US concentration camps and fires burning wild. Black Lives Matter peaceful protestors, Elijah McClain violin vigil attendees embracing, and a Jacob Blake Sr. interview talking about the fear he lived in seeing his son at the police's hand.

This country's double mortality was evident on insurrection day, January 6, the day that Trump and allies gave his supporters a command to invade the Capitol, and they did. Is it surprising that Trump supporters would do something so stupid? In one of the Monologues, Grullon, in character, shares the story of an anti-masker who peed in the middle of a CVS because the store associate asked them to put on a mask. Is it surprising that Trump sympathizers would do something so terrorizing? We have had homegrown terrorist attacks all over: El Paso Walmart shooting, Pittsburgh synagogue shooting, Charlottesville's Unite the Right rally, and sadly so many others. According to the Southern Poverty Law Center, currently, there are 21 hate groups in Ohio. Trump just added fuel to the fire.

The storming of the United States Capitol solidifies that white people in the United States are magically shielded by hundreds of years of white supremacy and are exempt from the iron fist that violently holds down QBIPOC and immigrant communities. There is a whole system to protect the privilege of these insurrectionists; still today many of them are roaming free, and some have even gone on paid work vacations to Mexico.

Does the "Midwesterners are very nice and polite" stereotype still hold water when your neighbor has a Gadsden flag and a Trump-Pence yard sign? Alicia performed a monologue about Southern Ohio having the largest number of KKK members back in the day. Although their figures are declining today, ideals of white supremacy are not. White nationalists have only grown stronger under the MAGA flag. Some are openly part of groups like Proud Boys and Oath Keepers, others quietly paid Kyle Rittenhouse’s 2 Million dollar bail.

In the end, Grullon centered and grounded my experience of the piece by performing the Epilogue from 100 Plays for the First Hundred Days by the iconic Suzan-Lori Parks. In this piece, after a stressful flight, up in the skies our character has a realization "underneath all the anger and fear we were all born to find a way to come together to find a way back to the Union" But damn, it's hard when after four years under Trump, after the attacks on the Capitol, after a plane packed from Trump Supporters who were coming from the insurrection, with no mind towards unity, chose to chant "Fight for Trump" and "USA" without their masks on.

Today as I write this in February, I still see the leftover political yard signs that people have defiantly decided to keep outside their homes. At this point, it's a clear statement of their belief system. There seems to be less and less room for unity, for common ground, in the face of such virulent hate and direct violence. Alicia Grullón's new work is a striking look at our fractured world, and is vital viewing for anyone who seeks to understand and explore our splintered and not-so United States. 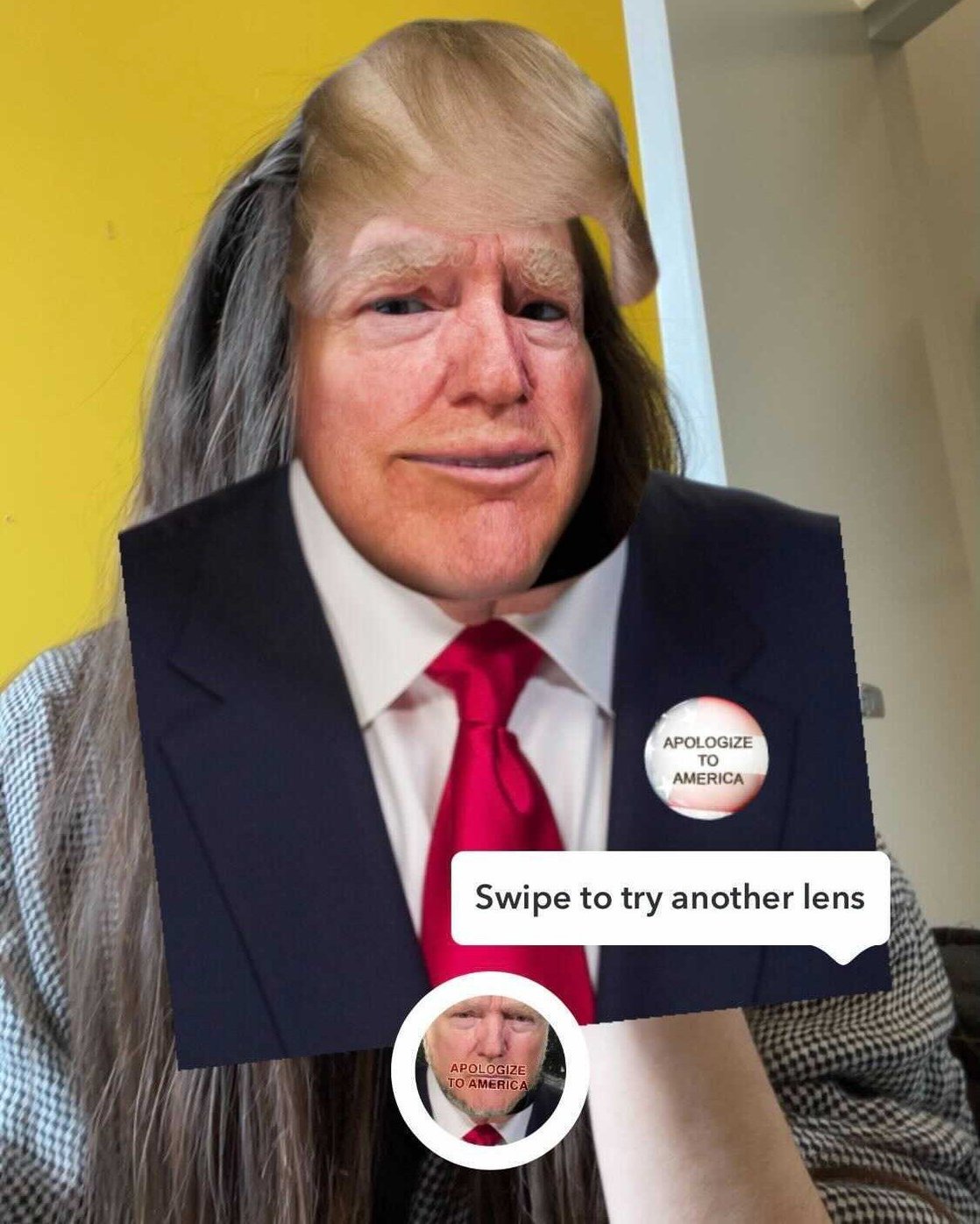 This should go viral. The prompt is simple: Go to Snapchat, search for the filter "Apologize 2 America". This filter will allow you to take on Donald Trump's face, and make him apologize. For a moment you can make him grasp the consequences of his actions, hold him accountable for his reign of terror. There are many filters with Trump's face out there on Snapchat and Instagram, but this project's outcome will live on the www.apologize2america.com as a digital archive of imagined regret, which, especially after Trump’s second impeachment acquittal, is likely to remain nothing more than a fantasy.

An apology is of course not even the beginning of how Trump should be held accountable. Maybe he will never regret the racist, sexist, bullying acts he has done in his lifetime. In fact, we have seen him double down on his past actions. In 1989 Trump spent $85,000 to place an ad in local newspapers, including the New York Times. He titled it "Bring Back the Death Penalty and Bring Back Our Police!" In this advertisement, he calls for law and order and the death penalty for rapists. He was speaking about the Central Park Five case where five Black and Latino teenagers were wrongfully convicted and spent years in prison. On June 18, 2019, he was asked if we would apologize to the now grown men for this ad; naturally he got defensive and refused.

Leo Selvaggio has crafted this filter, a virtual reality where people can make Trump do what he should be doing. Apologize to America is a participatory Augmented Reality art exhibition that expands how we interact artistically and politically on social media. COVID-19 has made it hard for many to form meaningful connections in artistic settings. Well, this one is right on your phone, and provides a much needed relief of hearing our vicious ex-president take some responsibility—even if it is only a virtual fantasy.