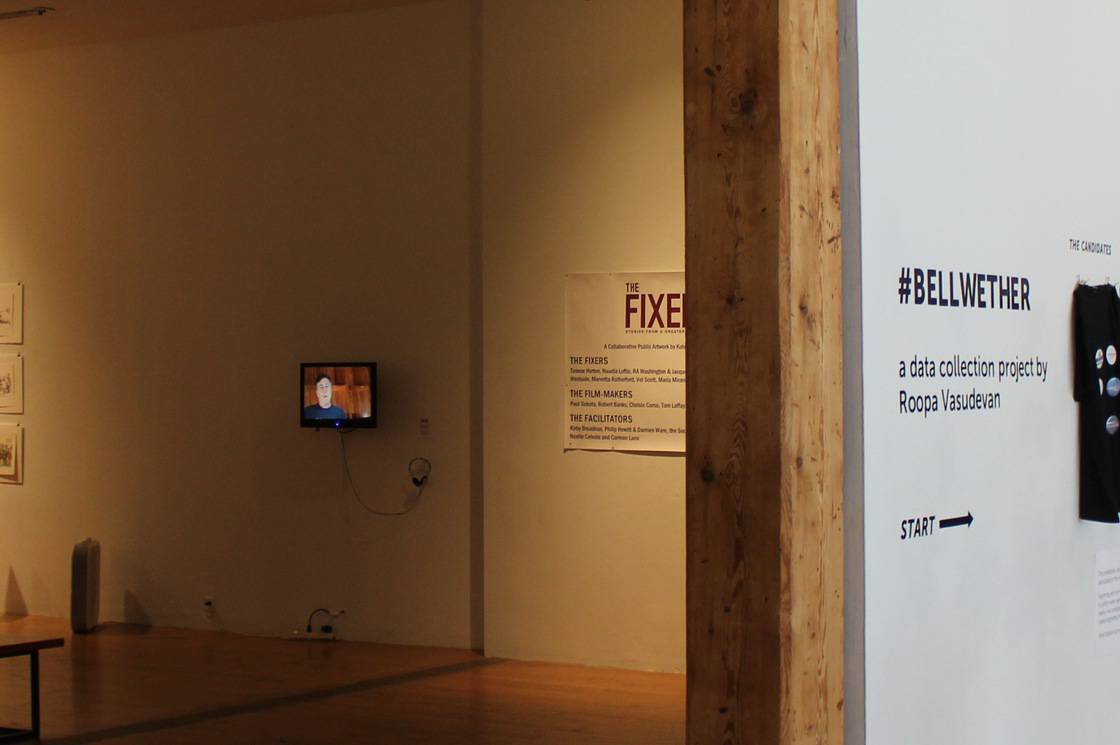 This summer's exhibitions come to a close, with the fully completed works that have been created in response to the current election cycle and the RNC in Cleveland.

Since August 2015, Roopa Vasudevan has been collecting tweets by Ohioans that reference presidential candidates. All of the data is on display as campaign collateral in #Bellwether. Now that the artist has sorted through almost a year of Ohioans' observations, hear what she's learned. Roopa will give a presentation about her data analysis, beginning at 6:30 pm.

Two screens will display all 6 films of The Fixers, a series of short films that explore the effects of political policies on the average citizen and what happens when the individual seeks their own solution to change Political Policy.

Start Here. Finish Here. is still on view and can be seen one last time.

Freska on Politics is still on view with works available for purchase.

The closing event will be followed by a Farewellcome party, where SPACES says goodbye to Roopa Vasudevan, and welcomes Tim Schwartz, the next SWAP resident who is already hard at work exposing your privacy.

Help raise $ for SPACES: $1 from every Platform New Cleveland Palesner purchased will be donated to SPACES. Tell the bartender you are with SPACES when you order.

Kate Sopko is an author, collage and installation artist whose recent work constructs venues and largescale social experiments to spark new public dialogues. Her 2008 book 'Stewards of the Lost Lands' looks at what caretaking, healing and social movement can actually mean between damaged people and a deeply damaged earth. Go to Artist Page

Roopa Vasudevan is an American artist, creative coder, and researcher, currently based in New York, NY and Shanghai, China. Her work explores the influence and impact that our increasingly digital and tech-reliant way of life has on culture, politics, and real world behaviors - and the ways in which technology... Go to Artist Page