Capitalism Works For Me! 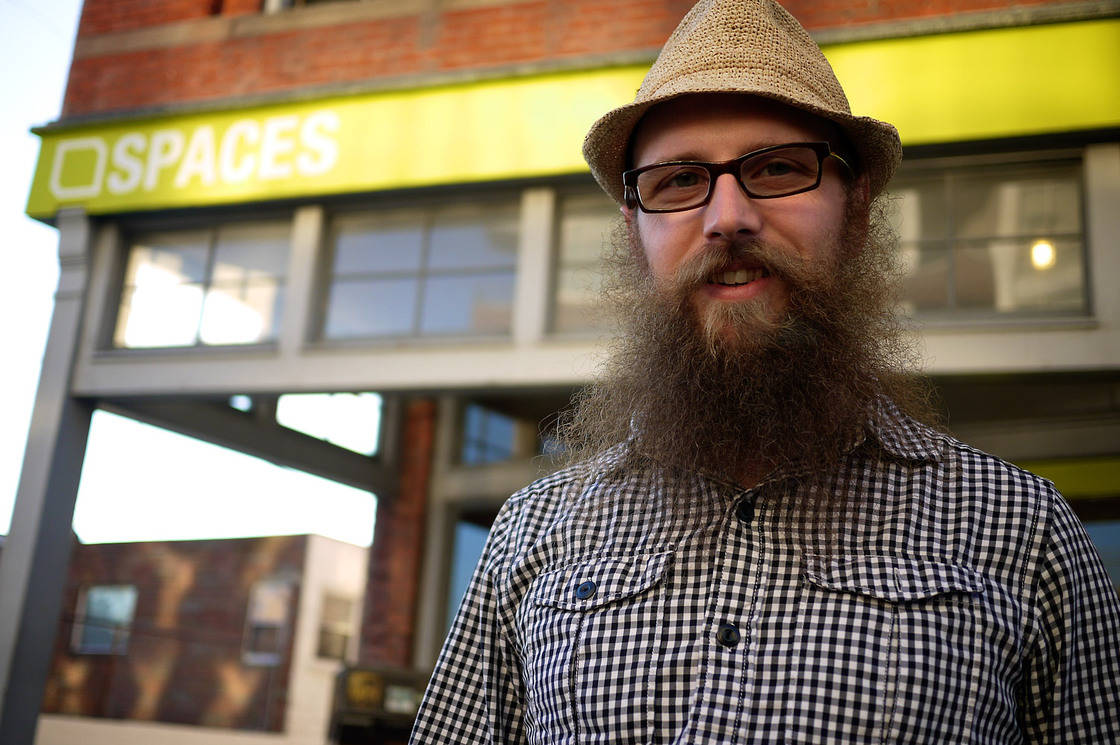 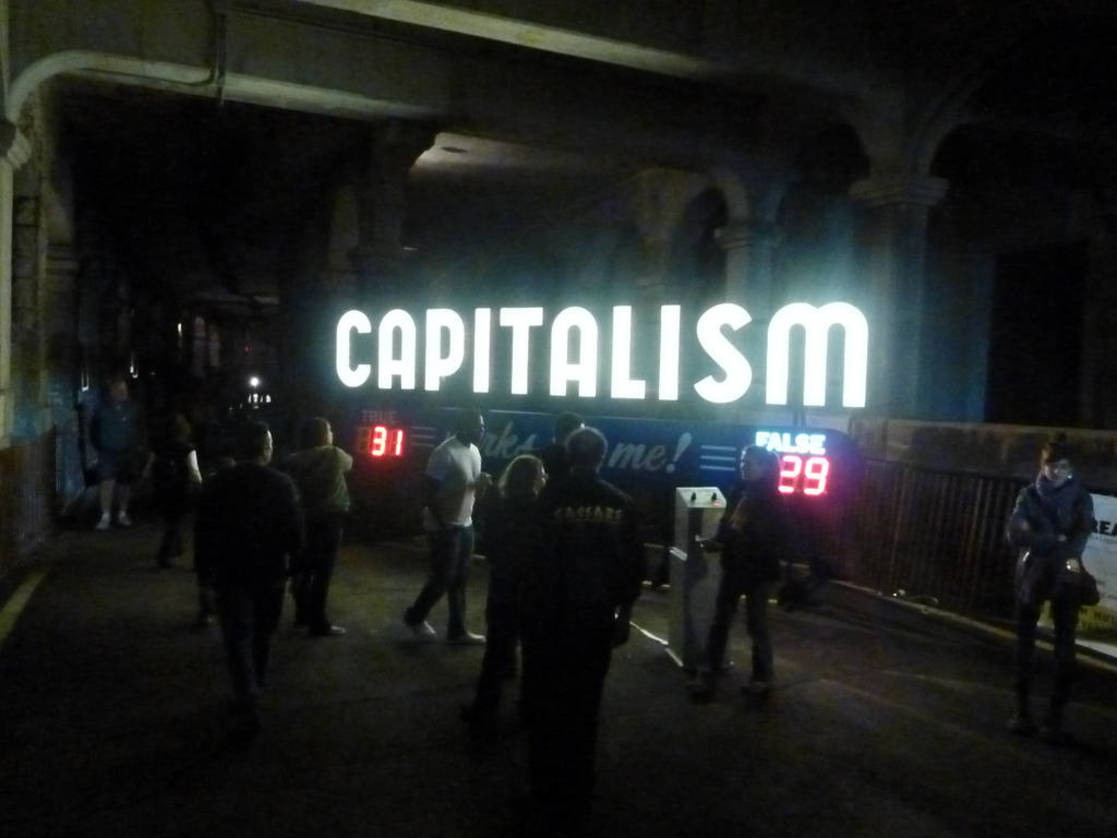 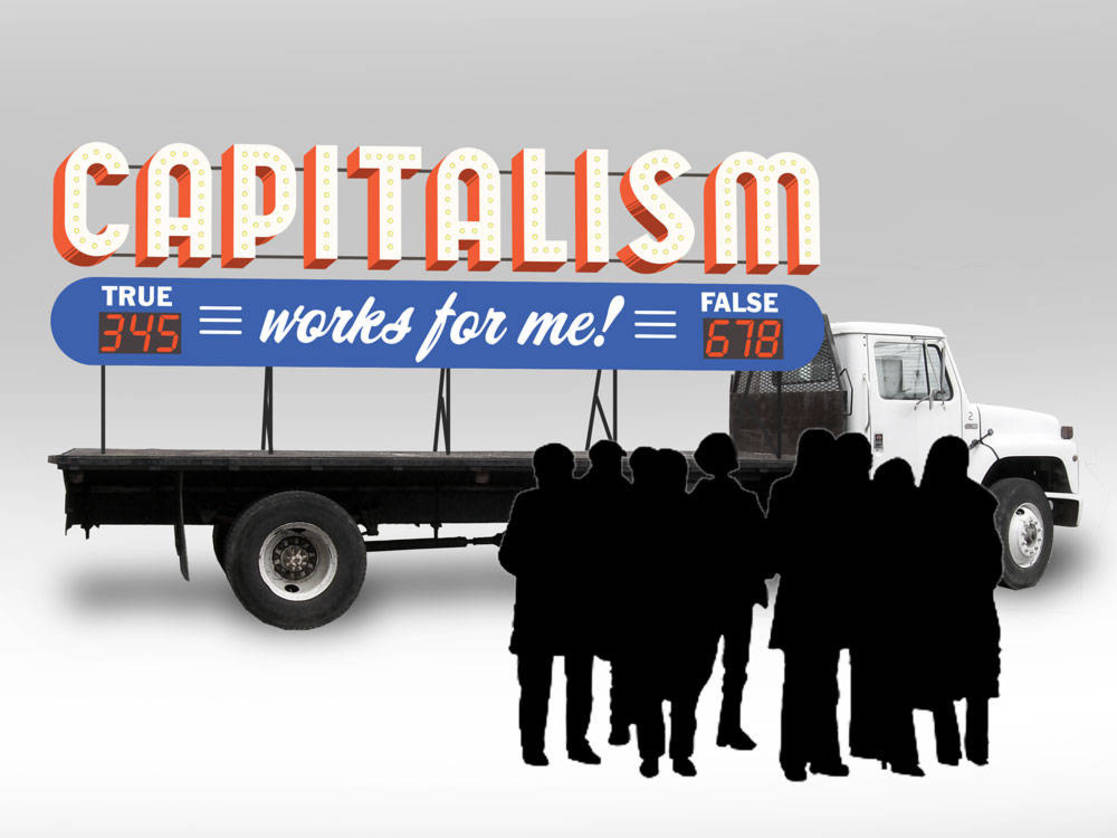 Capitalism Works For Me!  Steve Lambert | 2011 | photo by Jerry Mann

Capitalism Works For Me!  Steve Lambert | 2011 | photo by Jerry Mann 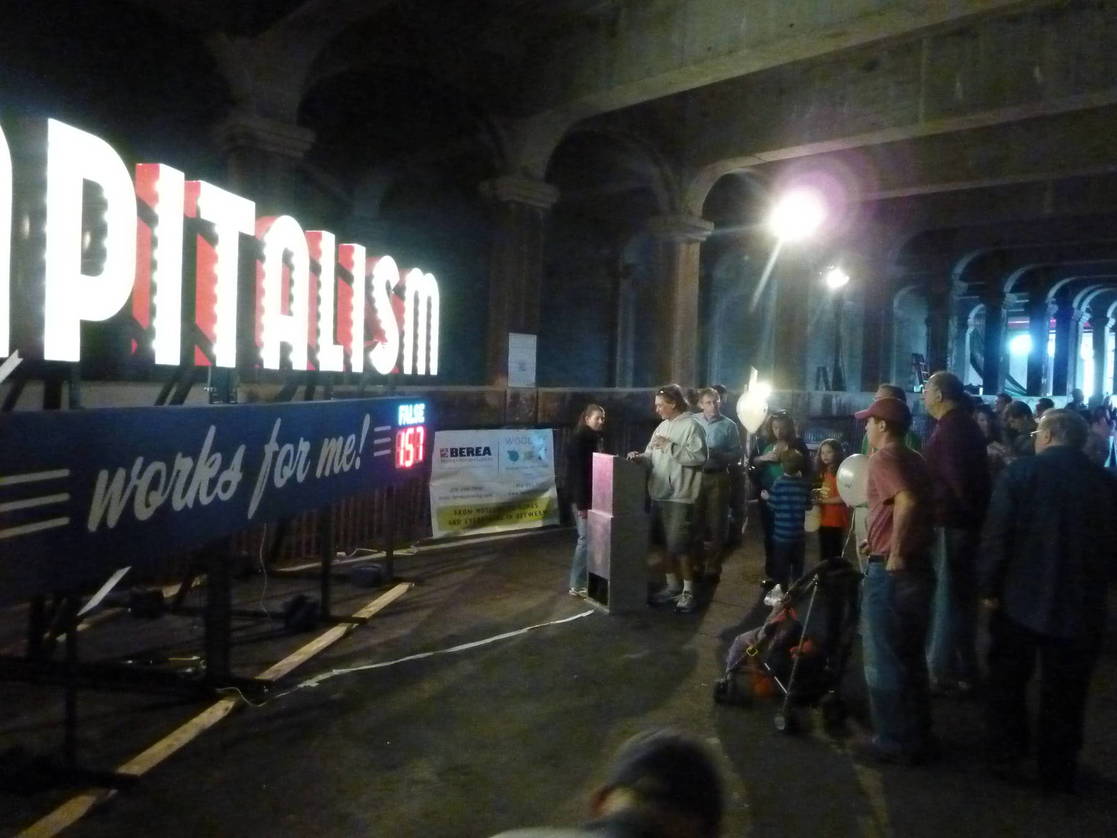 Steve Lambert's "Capitalism Works for Me!" is a 20-foot long lighted sign that allows viewers to vote "true" or "false' through a kiosk and accompanying LED scoreboard. The sign will first be shown at SPACES and travel around Cleveland before touring to Boston, Santa Fe, Los Angeles and other cities in the U.S.

The word "capitalism" is anathema to conversation—its introduction to social situations is often a cue that things will start to get uncomfortable. At the same time, capitalism is discussed every day in our culture using euphemisms like "jobs," "job creation," "the business climate," and discussing whatever "crisis" is deemed relevant: a housing crisis, financial crisis, job crisis, or fill-in-the blank crisis. These are pieces, but the whole is rarely a topic of frank discussion, much less any mention of alternatives or meaningful reform of the sacred cow.

But what to do? Start a conversation about capitalism and friends edge away slowly, and strangers even faster.

Make a game of it. Through Lambert's bright, glitzy sign that borrows its aesthetics from the trappings of capitalism, discussions of capitalism aren't framed as awkward party conversation or polemic political dogma, but as simple benign votes that are catalysts or gentle primers for discussion. The space around the sign becomes a zone where conversation of economic structures is welcomed and fostered.

Lambert says of his work, "For me, art is a bridge that connects uncommon, idealistic, or even radical ideas with everyday life. I carefully craft various conditions where I can discuss these ideas with people and have a mutually meaningful exchange. Often this means working collaboratively with the audience, bringing them into the process or even having them physically complete the work."

The project/sign will be on view at SPACES August 26-October 21, but will travel around Cleveland to see how the conversation changes. Here is a schedule for the sign's travels outside of the gallery space:

Steve utilized Kickstarter.com (http://www.kickstarter.com/projects/slambert/make-capitalism-work-for-me) to raise money to help get the sign made and travel around the U.S. Thanks to the 434 individuals who donated to the cause.

Steve Lambert is SPACES' 34th artist in residence as part of the SPACES World Artists Program (SWAP). SWAP is a residency initiative begun in 2002 that invites national and international artists to spend significant amounts of time in Cleveland. SWAP supports the creation, presentation and discussion of artwork while facilitating collaboration among audiences.

Steve Lambert's father, a former Franciscan monk, and mother, an ex-Dominican nun, imbued the values of dedication, study, poverty, and service to others; qualities which prepared him for life as an artist. Lambert made international news after the 2008 US election with The New York Times "Special Edition," a replica of... go to artist page