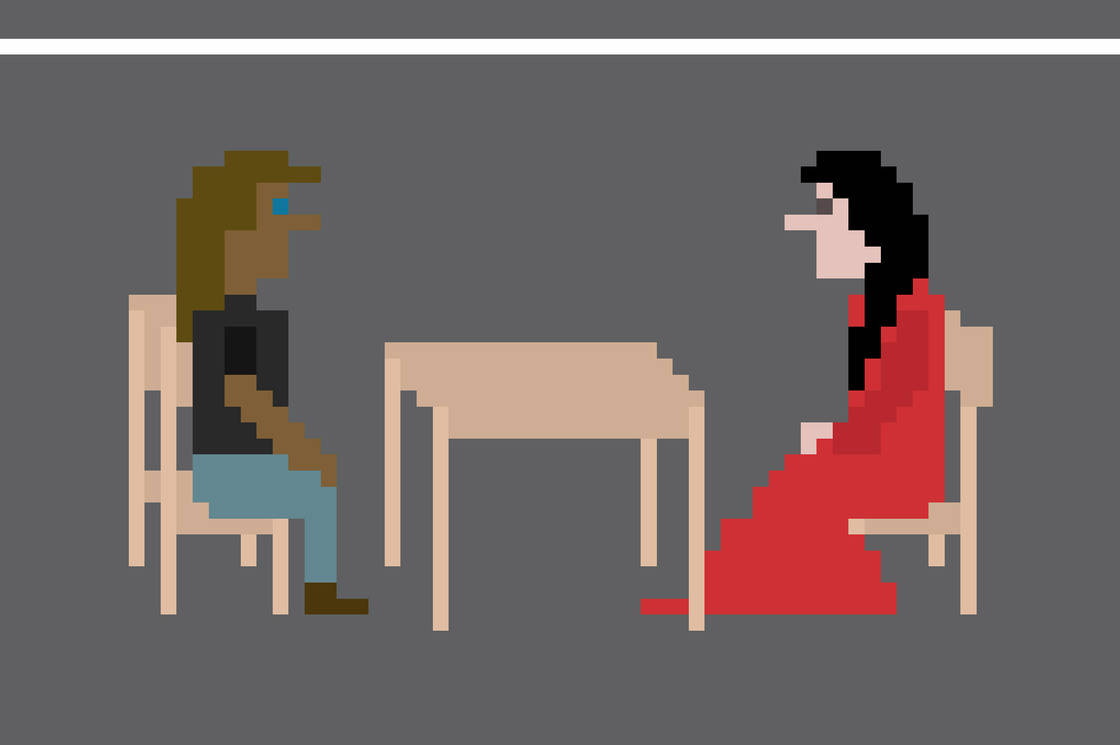 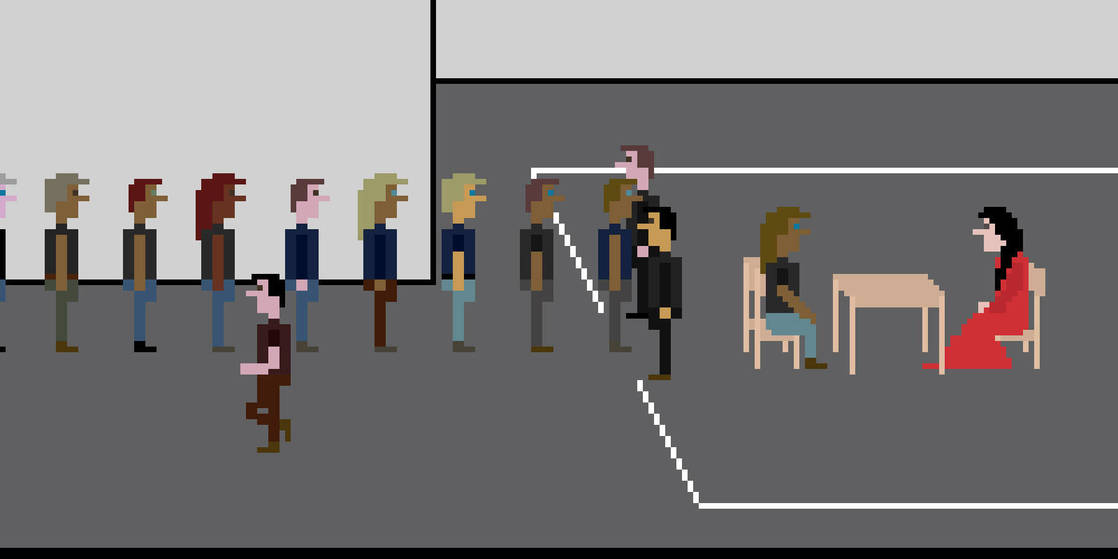 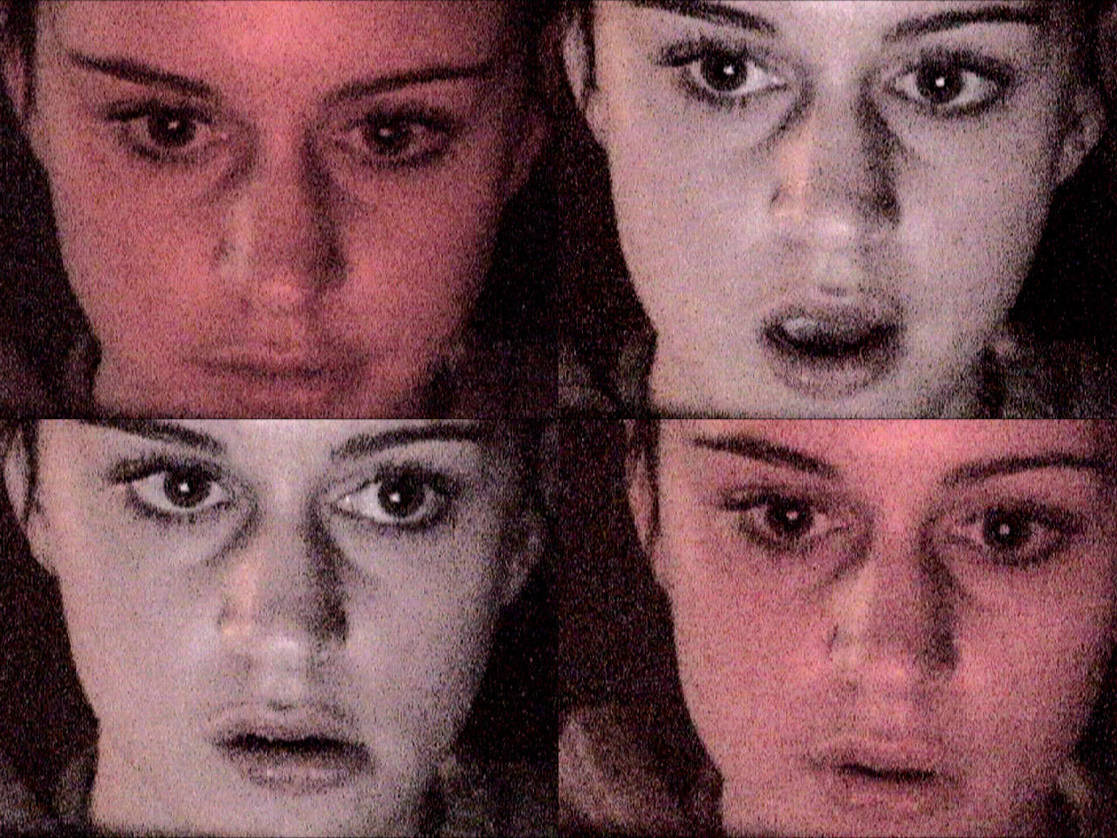 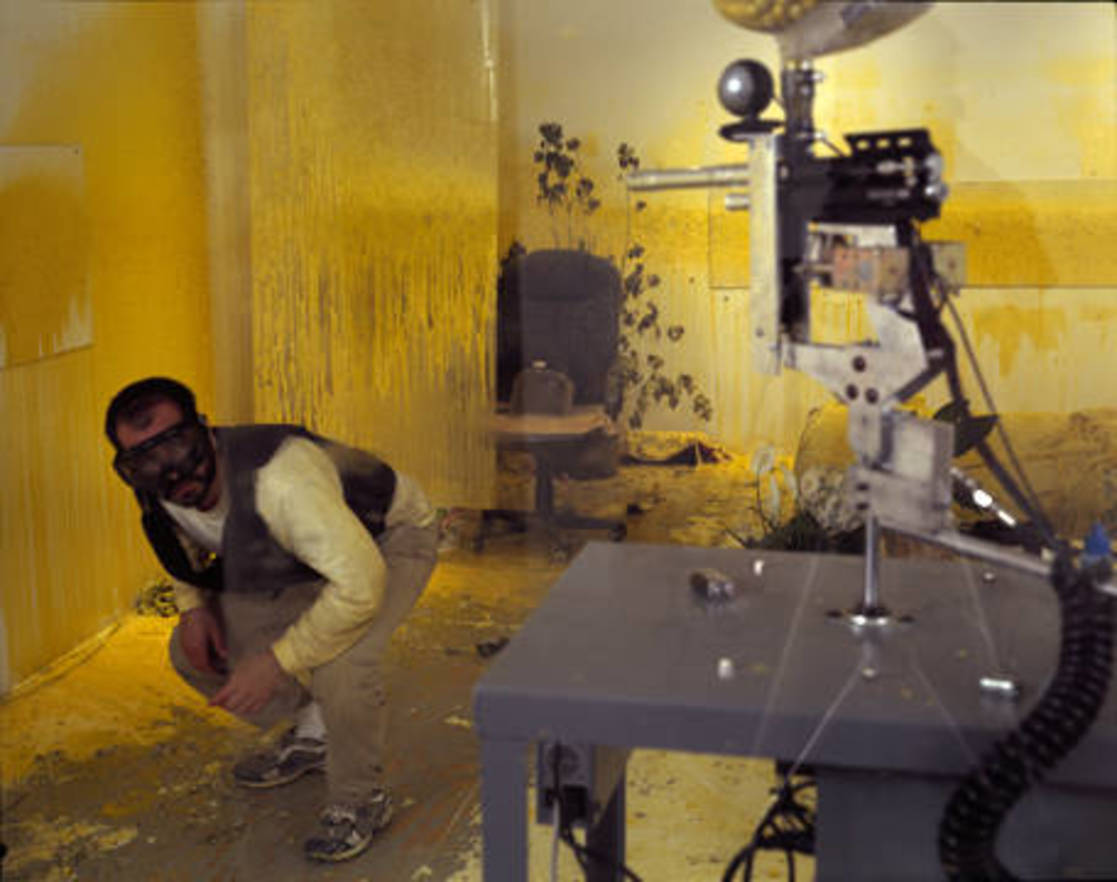 Performance art often centers around the artist's body improvising within parameters or working through a set of directions. Video games set the stage for a dual performance of the player's subtle physical dance of fingers across a controller and the virtual movements of pixel bodies. In Dana Sperry's video First Person Shooter, a player's face is illuminated only by the pulsating glow of a first person shooter video game. Her eyes dart back and forth and her face slightly twists as the game becomes more difficult. This is a documented micro-performance choreographed by the action on the screen.

Wafaa Bilal's contribution is a documentation of a performance that took place in Chicago's FlatFile Galleries in 2007. Domestic Tension, had Bilal, an Iraqi, living in the gallery for one month, while a mounted paintball gun was controlled by users via the internet. Bilal and the gallery were pelted by yellow paintballs over the course of the month as people took the opportunity to shoot an Iraqi.

Pippin Barr's quirky internet-based games use the form of video games to critique both gaming culture and the art world. In The Artist is Present, named after the noted Marina Abramović at the Museum of Modern Art (2010), the player arrives at MoMA to attend the exhibition. After waiting in line for a ticket, the player then joins an interminable queue to get the opportunity to sit with the pixilated Abramović. Rather than a game of action, it is a game of patience that points toward the performances and frameworks that surround the art.

Visitors to Up Up Down Down Left Right Left Right B A Start will have the opportunity to act out their own performances through artist-created games and arcade classics through July 19, 2013.

Note: "Up Up Down Down Left Right Left Right B A Start," also known as the "Konami Code," is a cheat code for some video games that allows players to immediately gain hundreds of lives or unlock "easter eggs"-special surprises or hidden game modes.

Barr is currently affiliated with the Institute of Digital Games at the University of Malta. He holds a PhD and an MSc in Computer Science from Victoria University of Wellington (New Zealand) and he has taught courses in experimental interaction and programming for game designers at ITU Copenhagen. Barr's... go to artist page

Iraqi-born artist Wafaa Bilal, an Assistant Arts Professor at New York University's Tisch School of the Arts, is known internationally for his on-line performative and interactive works provoking dialogue about international politics and internal dynamics. For his current project, the 3rdi, Bilal had a camera surgically implanted on the back... go to artist page

Knut LSG Hybinette was born in Enkoping, Sweden and is CEO of Two Twisted Monkeys. Currently, he is an assistant professor in Game Design and new digital media at Texas A&M University System. He works in multiple Medias including game design, photography, animation, video and sound. Knut has exhibited his work... go to artist page

Paolo Pedercini (b.1981) is a Pittsburgh-based artist wo teaches experimental game design and media production courses at Cernegie Mellon University's School of Art. He is well-known for his radical video-gaming project Molleindustria. He received his M.F.A. in Integrated Electronic Arts from Rensselaer Polytechnic Institute and his B.A. in Visual Arts... go to artist page

Troy Richards is an Associate Professor of Art at the University of Delaware. He has had solo exhibitions at Thomas Robertello Gallery in Chicago, Grand Arts in Kansas City, Duncan and Miller Gallery in Washington D.C., and a long-term installation at Eastern State Penitentiary in Philadelphia, PA. His work has... go to artist page