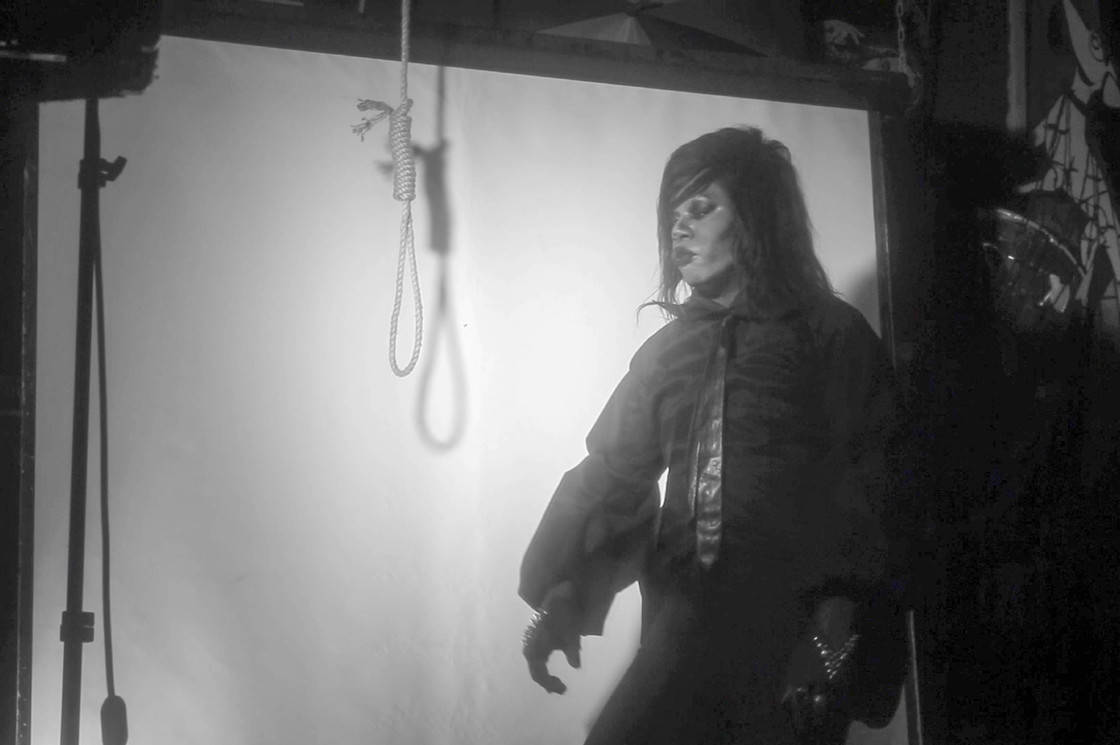 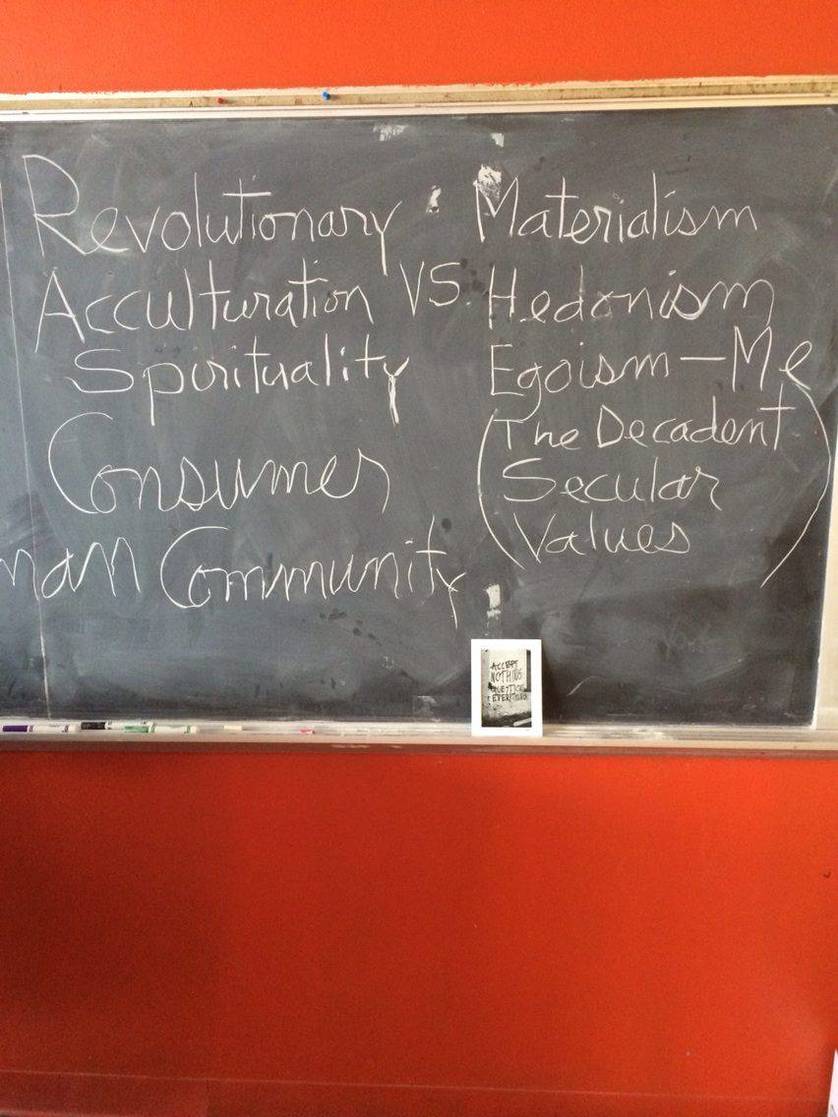 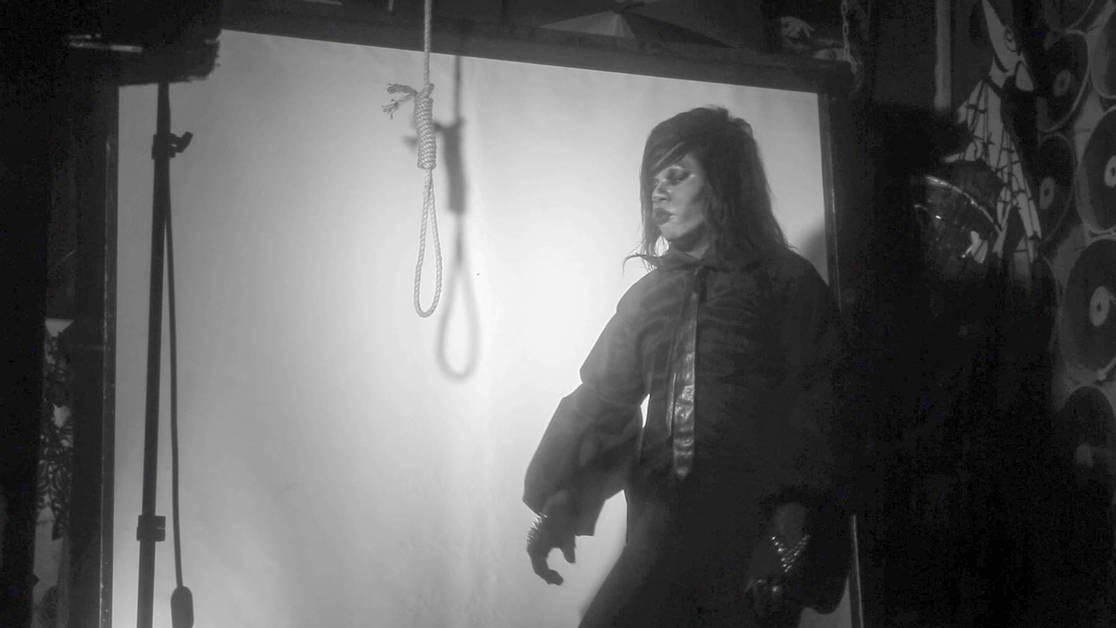 Back to Black  Tameka Norris | 2011 | single-channel video with sound | Courtesy of the artist and Jane Lombard Gallery, NY.

A body is a song to be sung
Curated by: Kerry Downey
(Brooklyn, NY)

The performing body takes many forms. When artists put their bodies on display by dancing, singing, or lip-synching for the camera, their movements and voices are edited in private and strategically placed in the world. The filmed body is always "once removed." The artists in this selection seize thisfilmic space and use it to reconsider the relationship between music and video, performance and representation in the post-MTV era. They use falsetto voice, a cappella, and lip synch to create dragged out stop animations, lesbian utopias, gothic slave hauntings, and other perverse encounters confronting racism and heteronormativity. Each artist creates visual constraints to crack open a transitional space where melancholy, disillusionment, and radical embodiment are possibilities rather than limitations. These new spaces turn collective American traumas into private utopias, and re-enactments become new forms of reality.

Angela Dufresne
Earth People , 2012
single-channel video with sound
Courtesy of Angela Dufresne
Duration: 04:51
In this cover of "Earth People" by Dr. Octagon, the camera cuts between scenes of Dufresne performing different parts of the song in her living room, kitchen and bathroom. She plays bass on the toilet, creates percussive ass slaps in the shower, raps the lyrics in the tub and kitchen, and dance-exercises in her living room.

Angela Dufresne
The Man That Got Away , 2010
single-channel video with sound
Courtesy of Angela Dufresne
Duration: 03:32
Dufresne's cover of the "Man that Got Away" (from Judy Garland's "A Star is Born"), cuts between over a dozen scenes of herself singing a cappella while fishing, driving, cooking, reading, and hanging out naked on a giant tractor in the woods.

Angela Dufresne uses acts of mimicry- -vernacular and perverse-- as keys to translation in song and painting. Mimicry is used to re-imagine our world, as training for higher levels of participation, self-reflection, and consciousness. Her work offers tools for imagination, radical empathy, and joy.

M. Lamar
Trying to Leave my Body , 2014
HD Video
5:25
Directed by M. Lamar
animation By Sabin Calvert
Courtesy of the artist M. Lamar
Trying to Leave My Body uses melodrama to consider the relationship between black history, performance, and everyday experiences of despair. The song reflects on those lost in the Trans-Atlantic slave trade, specifically those captured Africans trying to escape the condition in which they found themselves (including the threat of death). The irony of "trying" speaks both to the inability to escape enslavement and to being trapped inside one's self or body.

Tara Mateik
Tin Man Love Hangover
single-channel video with sound
In need of a good oiling, Tara Mateik plays the Tin Man fromThe Wizard of Oz, mechanicallylip syncing lines from the original film, until he gets lubed up by a Diana Ross impersonator, bringing him back to life to perform Ross' "Love Hangover." Often performing with collaborators who have trans or gendernonconforming bodies, Mateik's work disrupts gender binaries and expands the lexicon of queer histories to include transfeminist perspectives.

Tameka Norris
Back to Black, 2011
single-channel video with sound
4:10 min
Courtesy of the artist and Jane Lombard Gallery, NY.
In this remake of Amy Winehouse's "Back to Black," Norris layers her own voice over the music, erasing Winehouse's. Norris complicates this melodramatic love song through her simple performance, wearing black and white against a stark white background, drawing our attention to the song's title. Blackness as melancholy becomes a double entendre. Norris' cover reminds us of the history of appropriation of black culture (R&B and soul) by white musicians. As the music slows or her voice slips out of synch, the tightly wound pop song unhinges. These little blips raise questions of sincerity, flatten out Winehouse's interpersonal drama, and simultaneously raise the song's stakes.

The Objectification of Love in the New Hip Hop Culture
Curated by: Daniel Gray-Kontar (Cleveland, OH)
High school students at the Cleveland School of the Arts, and their teacher DanielGray-Kontar, are guest curators of this special teen curated edition of The Vault. Students selected videos from World Star Hip Hop, a video sharing website, to dissect how issues such as feminism and materialism are being presented, consumed and interpreted by today's youth. They also investigate why drugs, violence, and sex have been recently associated with hip hop.

Cleveland School of the Arts

Kerry Downey (1979, Ft. Lauderdale) is an interdisciplinary artist and teacher based in New York City. She holds a BA from Bard College and an MFA from Hunter College. Her work has recently shown at CCS at Bard College, Taylor Macklin in Zurich, Franklin Street Works (CT), Columbia... go to artist page

Angela Dufresne, born in Hartford, CT in 1969, is a Brooklyn based American artist known for paintings that explore narrative in a variety of ways. She was raised in Olathe, KS, the town where Dick and Perry stopped in before they went on the kill the Clutters. Dufresne was the... go to artist page

Born in Stamford, CT in 1979, Alex Golden is a New York based interdisciplinary artist who works in photography, video-installation, drawing, painting and print-making. Alex went to Wil-liams College where he majored in psychology and visual art. He spent a year at the Toronto School of art studying drawing and... go to artist page

M. Lamar works across opera, metal, performance, video, and sculpture to craft sprawling narratives of racial and sexual transformation. Lamar holds a BFA from SFAI and attended the Yale School of Art, sculpture program, before dropping out to pursue music. Lamar's work has been presented internationally, most recently at The... go to artist page

In his videos, performances, and installations, Tara Mateik creates critical reenactments that underscore moments of collective transfeminism across historical and geographic locations. His projects revisit key moments in pop culture where sexual, social, and economic power structures are in flux; these reenactments, then, are not passive recreations of the past,... go to artist page

With herself as her subject, Tameka Norris uses painting, video, photography, music, performance, and installation to explore the internal drives and external influences that shape identity. She came to art through music, which informs her practice. In addition to making her own music videos, full of tongue-in-cheek hip-hop posturing and... go to artist page

Timed tickets are available on the exhibition pages. One ticket admits up to 8 visitors in a single group. Sign up for our eNews for all of the latest updates!