A Man Was Lynched By Police Yesterday

A Collaboration Between SPACES & Guide to Kulchur 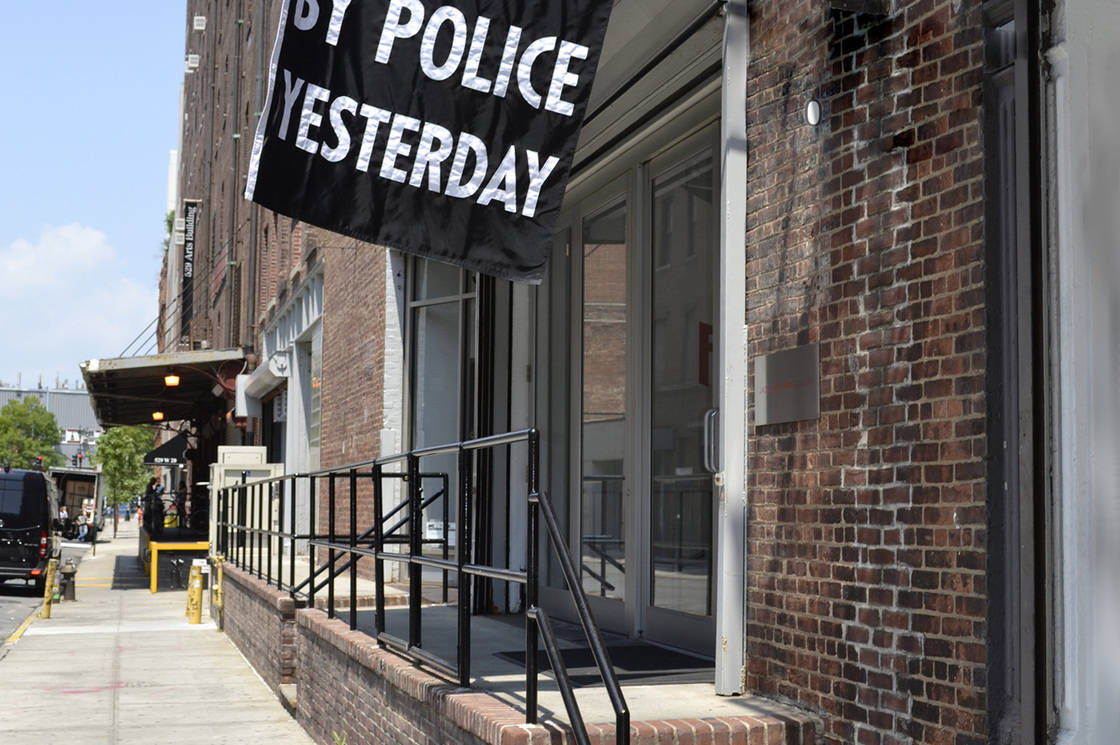 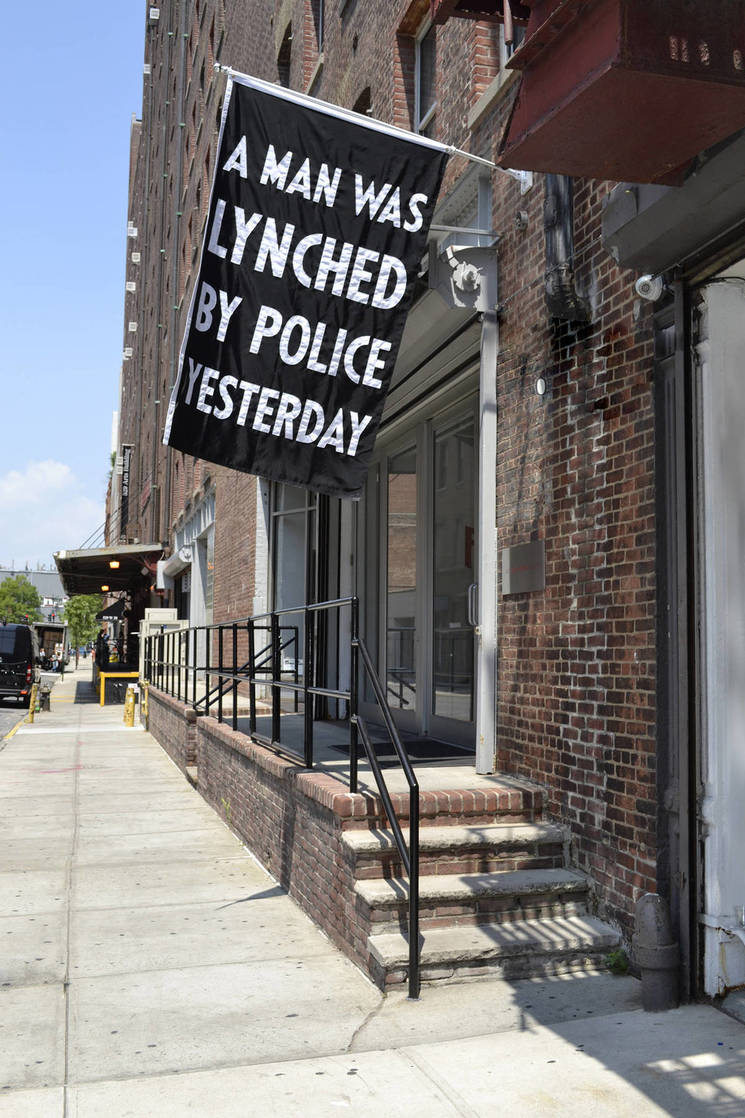 SPACES, a nonprofit organization that supports challenging and socially engaged artworks, and Young Kings, a new music store and commercial art gallery, will bring Dread Scott's A Man Was Lynched by Police Yesterday to Cleveland, in time for the final day of the Republican National Convention.

The provocative artwork is an update of a flag that the NAACP hung outside of their headquarters in New York City, from 1920 to 1938. Originally created in response to the 2015 murder of Walter Scott by a North Charleston police officer, the artwork was displayed on the exterior of Jack Shainman Gallery in NYC, as part of its current exhibition For Freedoms, but was moved inside the gallery last week at the request of the gallery's landlord.

Discussing the recent focus on A Man Was Lynched Yesterday by Police, Dread Scott recently said "During the Jim Crow era, Black people were terrorized bylynching-often public and publicizedextra legal torture and murder. It was a threat that hung over all Black people who knew that for any reason or no reason whatsoever you could be killed and the killers would never be brought to justice. Now the police are playing the same role of terror that lynch mobs did at the turn of the century. It is a threat that hangs over all Black people, that we can be killed by the police for no reason whatsoever...And the police never face justice for their crimes."

Cleveland has played a role in the national conversation about police brutality, as the site of two recent controversial incidences-against 12-year-old Tamir Rice, and Timothy Russell and Malissa Williams-as well as the home of the first national Movement for Black Lives convening. Since 2015 the Cleveland police department has been operating under a federal consent decree to restore relations between police and residents, and to overhaul policies that allow excessive use of force.

SPACES has a long history of working with artists who use art as a tool for exploring social issues and generating dialogue. "Art is a jumping off point for community members to discuss violence, both at the hands of police and against police," says SPACES Executive Director, Christina Vassallo. "While the sweeping statement on Dread Scott's flag may cause discomfort for some, not everyone has the luxury of distinguishing between 'a police officer' and 'all police officers.'"

The flag will fly outside of Young Kings, owned and operated by Guide to Kulchur Co-founder, RA Washington. "Collaborations like this have always been a part of Cleveland's artistic fabric, so I am thrilled to be a part of such a timely and historic piece."

Members of Twelve Literary and Performative Arts Incubator--an intergenerational teaching, learning, workshop, and performance space for poets, playwrights and performance artists--will write responses to the hanging of the flag, its historical resonance, and its meaning in the contemporary moment. Their responses will be made accessible through the online presence of the presenting partners of this installation.

ABOUT DREAD SCOTT
Dread Scott makes revolutionary art to propel history forward. He first received national attention in 1989 when his art became the center of controversy over its use of the American flag. His art has been exhibited and performed at MoMA PS1, the Whitney Museum, BAM (Brooklyn Academy of Music), the Museum of Contemporary African Diasporan Arts, the Contemporary Art Museum Houston, The Walker Art Center, and the Pori Art Museum in Finland. Scott's work is in the permanent collections of the Whitney Museum of American Art, the New Museum of Contemporary Art (NY), and the Akron Art Museum. For more information, visit www.dreadscott.net.

ABOUT SPACES
SPACES is the resource and public forum for artists who explore and experiment. It develops an interconnected community through barrier-free access to contemporary culture and provides international, national, and local artists the freedom to create remarkable works of art that help us see the world in unexpected ways. SPACES is located at 2220 Superior Viaduct, in Cleveland, OH. Gallery hours are Tuesday - Sunday: 12 ? 5 pm, and the gallery is open until 8 pm on Thursdays. For more information, visit www.SPACESgallery.org, call 216.621.2314, or email contact@SPACESgallery.org.

ABOUT GUIDE TO KULCHUR
Guide To Kulchur is a cooperative project founded by Lyz Bly, Ph.D.and RA Washington, as an incubator for emerging and marginalized voices within the print medium. Poet and activist RA Washington opened Young Kings in the Hingetown area of Ohio City in June 2016 to provide young painters and streetwear artists a place to incubate and sell their designs. For more information, visit www.guidetokulchurcleveland.com, call 216.314.4644, or email tinysubmissions@gmail.com.

Support for the production, shipping, and installation of Dread Scott's A Man Was Lynched By Police Yesterday is provided entirely by private donors.