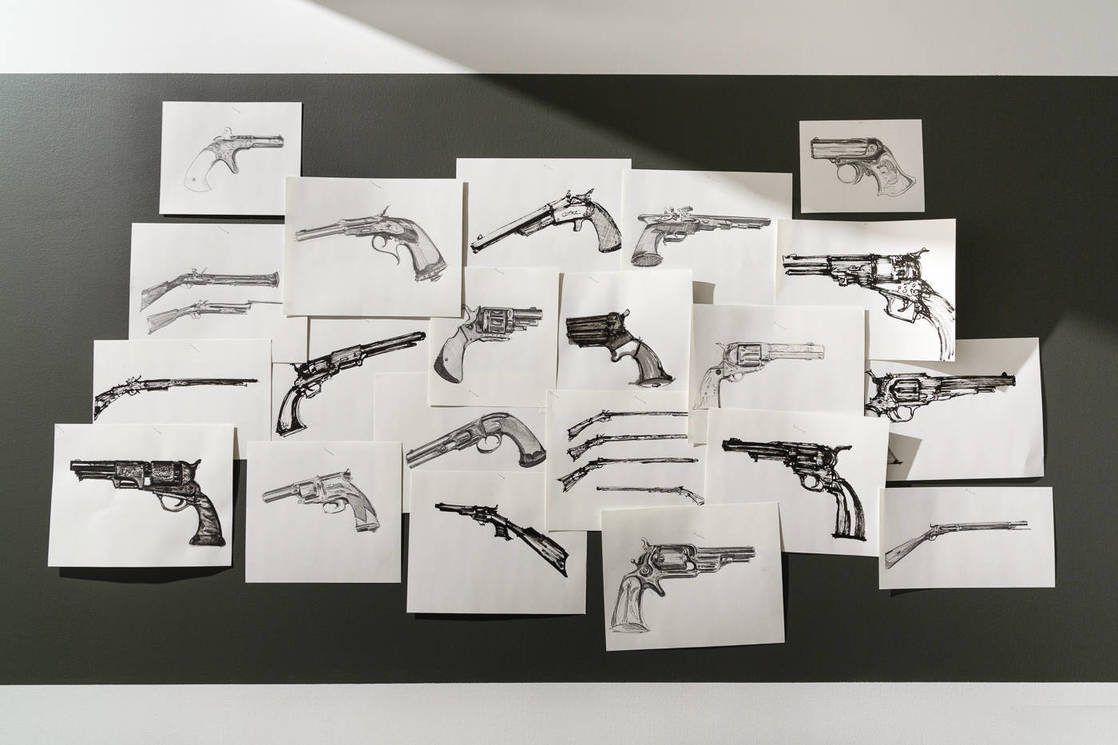 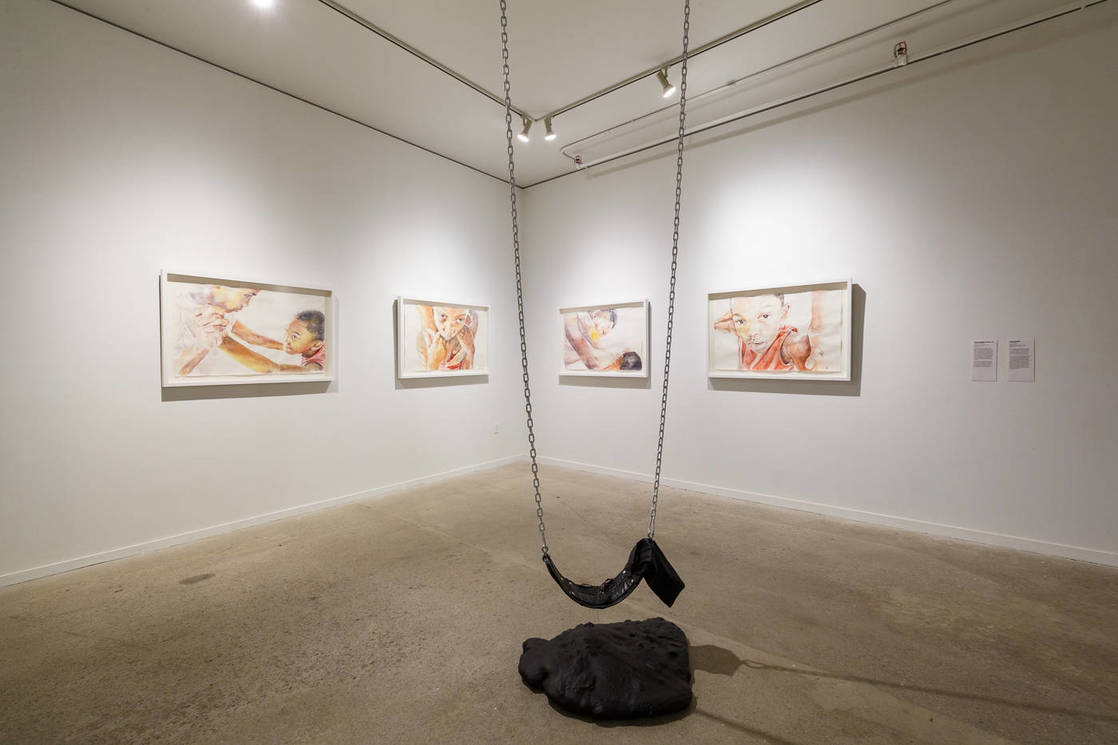 Nikki Woods, Gunslingers (large), How the West Was Won (at top), Badlands (at bottom), installation (2019) Photo by Rustin McCann

Michelle Graves, A Life Is a Life, installation detail (2019) Photo by Rustin McCann

Michelle Graves, A Life Is a Life, installation detail (2019) Photo by Rustin McCann 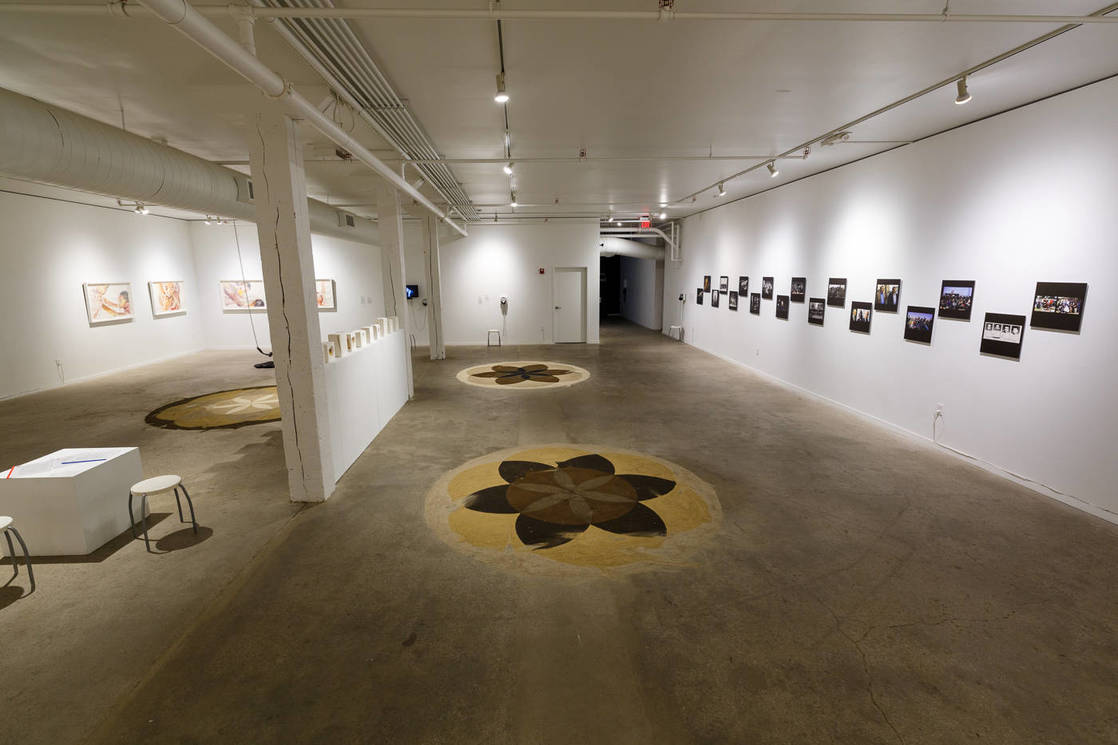 Ratified by Congress in 1791, the Second Amendment empowered state militias and ensured the federal government could not disarm citizens. Since then, the Second Amendment has been challenged from various perspectives, including those who consider a "well-regulated militia" as a states' rights issue and those who see it as guaranteeing the individual’s right to own and carry firearms in expanding circumstances.

America’s Well-Armed Militias examines the entwined histories of American culture, social movements, and gun use. Six artists trace the influence of firearms—from national independence to present day—and consider what compels specific groups of civilians to arm themselves. Through newly commissioned works, participating artists address how the Second Amendment has been interpreted by and applied to different groups of people, and how the forces of rugged individualism, civil rights, border security, economic distress, and self-defense complicate our understanding of this issue.

The dominant thought in my production is the effects of war on the human element; it is that general theme that brings a unity to my aesthetic. The body of work is my vernacular. I can only generalize that this language and perspective is one shared with others that have traveled... go to artist page

Michelle Graves (Chicago, IL) thoroughly enjoys interweaving physics and physiology research with existential observation. In organizing her research, she constructs formulas or techniques and applies material parameters for making bodies of work. Graves is curator and co-owner of State of the Art, an art subscription/consulting service and the chair of... go to artist page

Dante Rodriguez was born in Uruapan, Michoacán, Mexico in 1978 and raised in Lorain, Ohio by a Puerto Rican family. Always drawing as a kid, it was “natural to study art in college.” He received a BA in Studio Arts from Cleveland State University. Although his concentration was in Drawing, he... go to artist page

Darius Steward (1984) is an American Artist from East Cleveland, Ohio. Outliving the neighborhood, he grew up in, Steward is one of a select few whose determination got him out of the zip code. Completing his undergrad at the Cleveland Institute of Art in 2008 and his MFA at the... go to artist page

Jared Thorne holds a B.A. in English Literature from Dartmouth College and Master in Fine Arts from Columbia University. His work speaks to issues of identity and subjectivity as it relates to class and race in America and abroad. Thorne is an Assistant Professor in the Art Department at The... go to artist page

Born in 1990, Nikki Woods is a painter that makes expressive paintings of highly decorative and decadent landscapes, objects, and centerpieces where images and material merge in and out of states of visual and psychological slippage. A recent graduate from the Cleveland Institute of Art, Nikki has shown in multiple... go to artist page 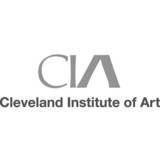