Oh, Gods of Dust and Rainbows 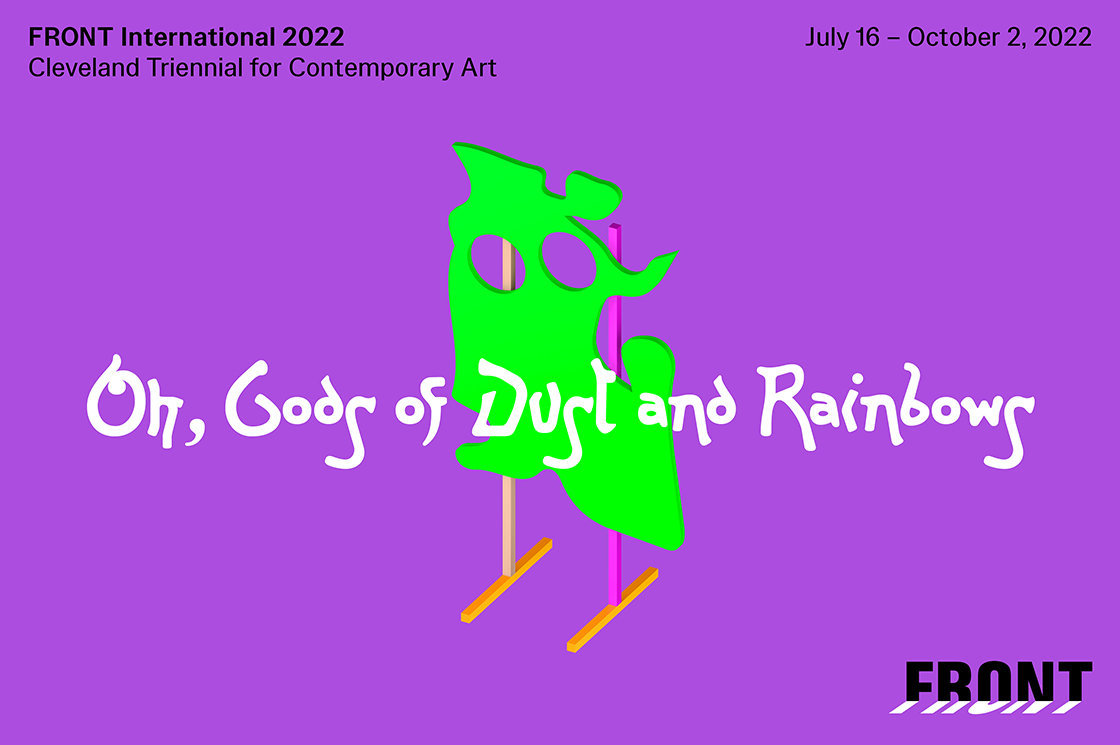 How can we rewild the ways we understand and imagine natural phenomena?

On the morning of June 22, 1969, the Cuyahoga River, whose bends and turns mark the western edge of downtown Cleveland, caught fire. Though it was neither the first such incident nor the most catastrophic, lasting not even long enough to be documented in a photograph, this event unexpectedly became a stand-in for the widespread industrial pollution plaguing American cities and landscapes and an important symbol of the nascent environmental movement. At SPACES, the artist-initiated nonprofit located less than a mile from the river, FRONT 2022 probes this moment in Cleveland’s history through a group exhibition that reflects on the ecological systems that connect us and reveals the tensions between the vitality of nature and the representational systems through which we attempt to understand and tame it.

Lurking on the gallery floor, Isabelle Andriessen’s metabolic sculptures perform by means of animated inanimate materials. Imbued with agency, they feed off of each other as well as their surroundings. They compose a landscape governed by “activist” agents and reveal a grim speculation about the (near) future. In relation to these sculptures are never-before-exhibited prints and drawings by artist, writer, and composer Jurriaan Andriessen that illustrate a utopian empire that envisions systems and architecture that reject capitalism.

Building on his ongoing investigation into the mythopoetics of wind, Haseeb Ahmed’s sculptural installation uses a weather station and aeoliphones to produce a real-time film about how winds affect our lives. Punctuated with meditative close-ups of gently swaying crop fields, Jumana Manna’s film Wild Relatives (2018) investigates the complicated politics around the preservation and repatriation of seeds in the aftermath of the Syrian civil war. Supplementing her film are collages made from packaging for chemical household cleaners that critique the way idyllic representations of nature are used to market environmentally destructive products.

Finally, in response to the overgrowth of algae and the suffocation of other life forms in nearby Lake Erie caused by agrochemical runoff, Cooking Sections cultivates and celebrates regional farming practices committed to using non-polluting alternatives through a floating aerator fountain at the lakefront. The duo’s project draws attention to the crisis while alleviating its effects by returning breath to oxygen-starved populations, both non-human and human, who live in and along the shores of the lake.

Cooking Sections examines the systems that organise the world through food. Using site-responsive installation, performance and video, they explore the overlapping boundaries between art, architecture, ecology and geopolitics. Established in London in 2013 by Daniel Fernández Pascual and Alon Schwabe, their practice uses food as a lens and a tool... go to artist page

HASEEB AHMED (b.1985) is a research-based artist. Originally from the US, he now lives and works in Brussels. He produces objects, site-specific installations, films, and writes for various publications. Often working collaboratively Ahmed integrates meth-odologies from the hard sciences into his art production. His recently completed Wind Egg Trilogy blends... go to artist page

The work of Isabelle Andriessen (1986) is situated on the interface between performance and sculpture. She strives to stretch the properties of synthetic materials to give inanimate matter a metabolism and a certain “agency”. Using electricity and chemicals, she manipulates materials such as aluminum, epoxy and ceramics so that they... go to artist page

Inspired by a life-changing encounter with The Limits to Growth, the landmark 1972 study by the Club of Rome that articulated the fatal dangers to humankind of unchecked economic and population growth, the Dutch artist, writer, futurist, and composer Jurriaan Andriessen spent over fifteen years researching, imagining, and illustrating a... go to artist page

Jumana Manna is a visual artist and filmmaker. Her work explores how power is articulated, focusing on the body, land and materiality in relation to colonial inheritances and histories of place. Through sculpture, filmmaking, and occasional writing, Manna deals with the paradoxes of preservation practices, particularly within the fields of... go to artist page

‘I Believe Strongly in Vulnerability’: Curator Prem Krishnamurthy on What Cleveland’s FRONT Triennial Can Teach About the Healing Power of Art