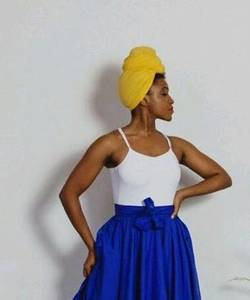 Born and raised in the sunny isles of Nassau, The Bahamas, Gabrielle discovered her love for dance at an early age. She trained and performed under the tutelage of Dr. Anne Peterson and Dr. Marilyn Deveaux. In 2016, she moved to Cleveland and continued training and performing with Elu Dance Company. Local credits include her performance in Caught at Cleveland Public Theater's 2017 Danceworks series. Gabrielle has performed in works by various local choreographers, including: Erin Berry, Anne Howard (of Levity Dance), Akane Little, Katherine Dyke, Erin Pennebaker, and Lauren Holler. She has performed for consecutive years at local events including Parade the Circle and Station Hope.

Now, Gabrielle is enjoying her first season as a member of Company A with Mojuba! Dance Collective, a Cleveland based Afro-modern dance company. She is also co-directing an evening-length dance project, titled Soursop Stories. The project showcases an African diasporic experience from the perspectives of two Caribbean women. Gabrielle enjoys thrifting and watching period films with her husband and small dog.